We Cross the Dreaded Bay of Biscay by Jojo

Our big family adventure started three years ago when the call back to the sea became too strong to deny. My young boys then 12 years and 10 years old, with the help of some old friends taking us sailing, persuaded my husband Simon that we should go on a sailing adventure.  Up until that time, Simon’s only sailing experience had been dinghy sailing in the Thames Estuary at the age of 13.
The plan was to sail down to the south of Spain then across to the Caribbean.  It took us three years to find a suitable boat and prepare her for blue water sailing. I am the skipper, mum and cook, which at times is an interesting mixture. Simon and the boys, Finbar and Lochlann, are new to the sailing life and part of my mission has been to do everything I can to ensure that they enjoy the experience.
I was brought up sailing the oceans with my parents on the standing gaff cutter Mjojo the boat they built in Lamu, Kenya in the 1960s. I am an old fashioned girl when it comes to boats, so I wanted to find a gaff cutter that was suitable and safe for my family. With help from friends we decided on the strong and seaworthy Wylo II (a 35 ft steel gaff cutter designed by Nick Skeates) and found Island Swift on the Isle of Wight and bought her in 2013.  She is a pretty boat that sails beautifully, is very seaworthy and is the perfect size for my family. 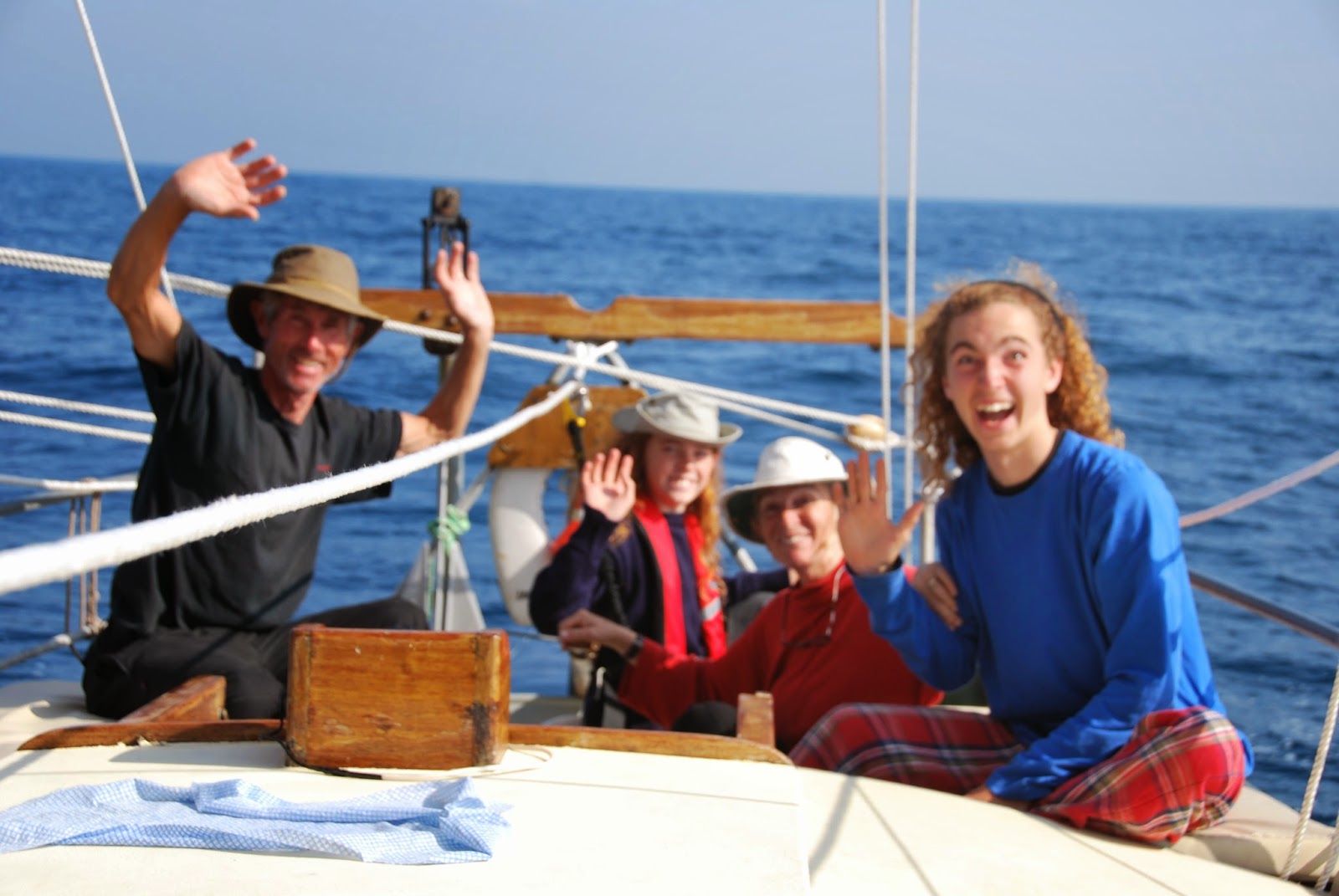 It was not too difficult to arrange time off from work because we are self-employed performers.  We run a street theatre company (Bash Street Theatre) working extensively throughout Europe performing at summer festivals. Our shows use live music and no language to tell a silent movie-style story. But turning down work when you are self-employed is very hard, and our compromise was to work a short season and leave during August.
Finbar and Lochlann have never been to school, mainly because of our performing lifestyle, and have been home educated.  They have always come on tour with us and are much travelled by land but never by sea. We are hoping to perform some musical shows together while we are cruising. On board we have an accordion, a small electric piano, a mandolin, a violin, a guitar, a bodhran, a penny whistle and a flute, two unicycles and juggling equipment. To get us started we went busking at Falmouth Tall Ships and earned enough to pay our anchor fees (and ice creams for the boys).  This was a good start to paying our way with music. 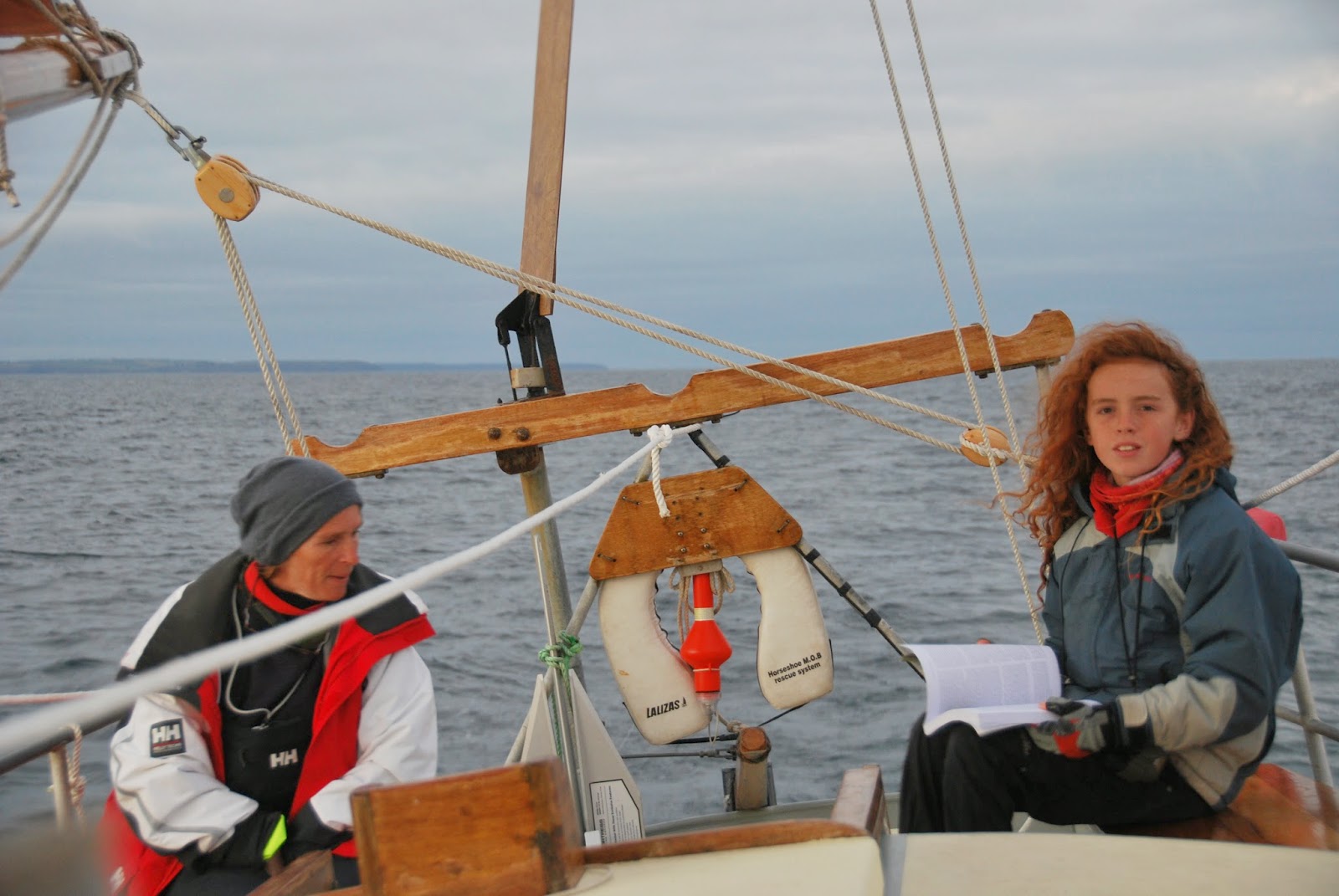 Eventually the big day arrived.  Two days after Tall Ships in Falmouth 2014 we set off to cross the ‘dreaded’ Bay of Biscay with a good 5-day forecast. I would have preferred to cross in June or July but work commitments did not allow us to leave until mid August, by which time the weather was not ideal.  Weather watching and doing the last minute jobs did nothing to calm the pre-passage nerves.  But when the day dawned we were all more than ready to leave.  We sailed out of Falmouth under full sail (mainsail, topsail, staysail, jib and jib topsail) and three dolphins came to speed us on our way. The wind was NE 3-4 as we streamed the Walkers Log just off The Lizard and set course for 100 nautical miles off Cape Finisterre.
The crew consisted of: Finbar, now 15 years old, a very useful foredeck hand and our ship’s scientist; Lochlann, cabin boy and ship’s musician, now 13 years old and the driving force of this whole adventure (he wanted to sail the oceans just like his mum had done); and Simon, who used to say that sailing was not for him but has turned out to be a natural sailor. 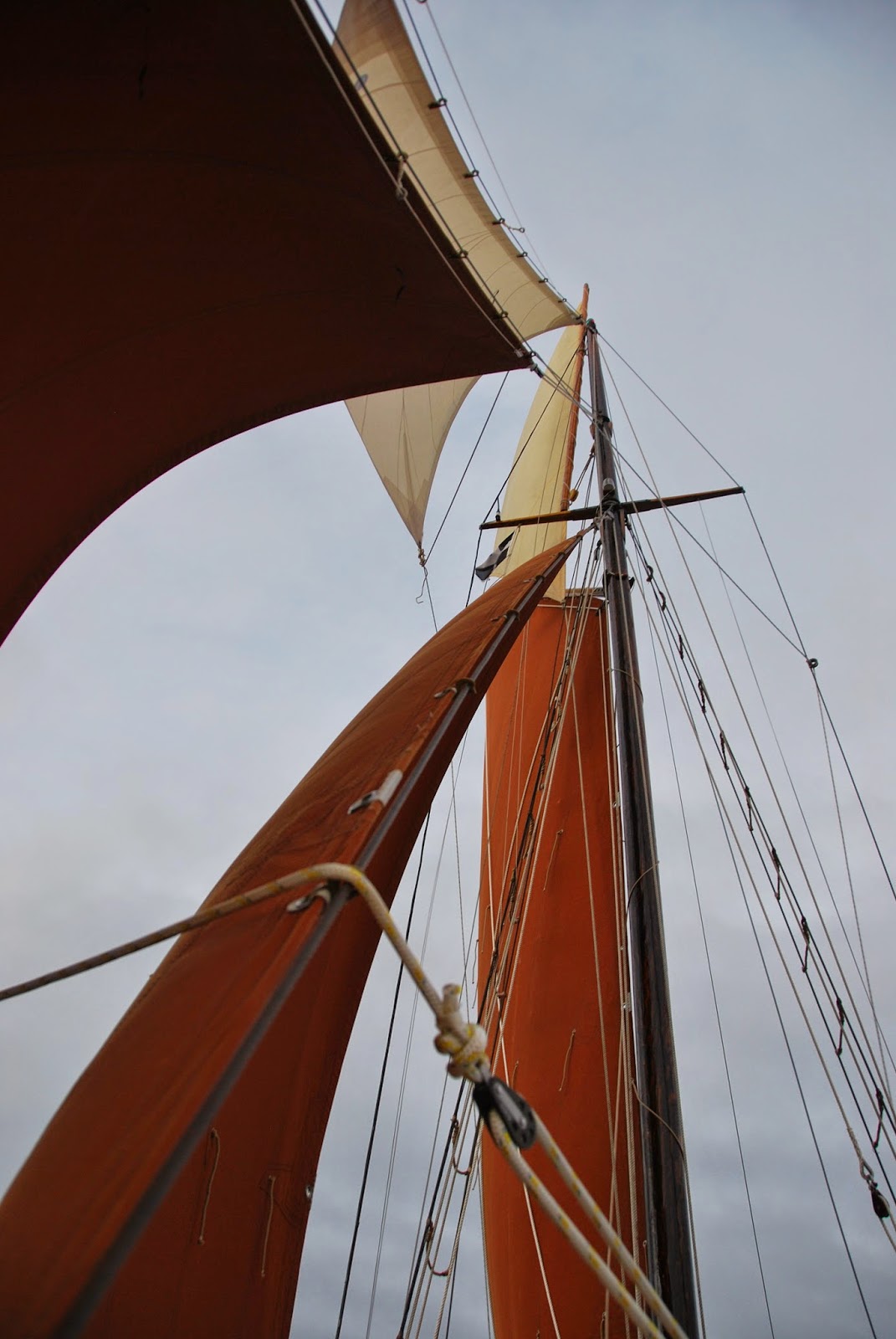 We were all excited as we rounded The Lizard. Then as the sun went down, we ate Biscay cake and waved goodbye to the lights of our hometown Penzance twinkling in the darkness. This was our first experience of sailing at night! The home-made self steering (an ingeniously simple design by Nick Skeates) did a wonderful job of keeping us on course allowing those on watch to fill in the log and generally potter about.
We set up our watch system as closely linked as possible to everyone’s natural body rhythms.  Lochlann took the 7pm to 9pm watch, followed by Finbar until midnight.  Both boys were excellent watch leaders, taking the responsibility seriously and proving themselves to be very reliable.  It fell to Simon to take the midnight watch until 4am, when I took over.  Lochlann would then wake up first and we would share the morning watch until the whole family was awake.  During the day we had a less rigid system with someone always on look out.
When I came off watch in the mornings my first job as mum was to make sure that everyone had washed and had a nutritious breakfast. The boys both needed some seasickness tablets, but no one was particularly ill. Although I do insist that everyone takes their turn to prepare meals, the reality is that I am the ship’s cook. Every other day I made bread, as this is the staple diet for my family. Then of course, after we had finished our Biscay fruit cake, I had to make Cape Finisterre chocolate cake! I think my family runs on bread and cake. 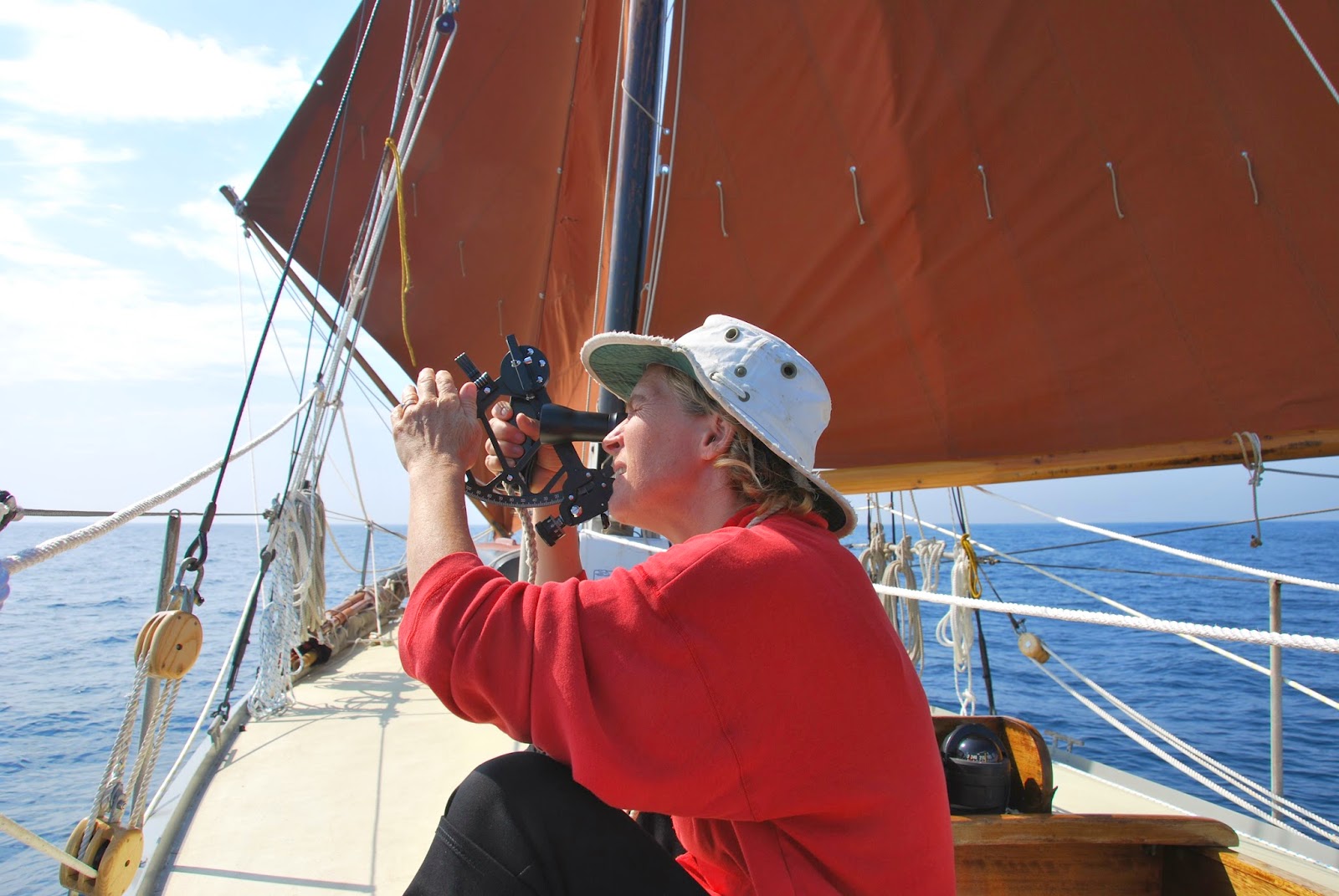 The passage was varied and generally provided us with all the opportunities we needed to test our readiness for ocean cruising.  It was amazing and exciting to cross the continental shelf, sighting pilot whales, seis whales and many dolphins.  A highlight for the boys was a baby common dolphin swimming with its mother. As part of our home education activities the boys plan to learn traditional navigation and study marine biology. On calm days during the passage we used the sextant to take sun sights and see how close we could come to our GPS position - good enough for a first try.
After a few days of a mixture of calms, gentle winds and rolling along to a force 4/5 we were tested on the fourth night with a force 6 gusting 7.  We slowly reduced sail until we were under staysail and one reef in the main.  We had practiced reefing before we left, but this was the first time we have reefed at sea in the dark. This windy episode showed up some minor issues, the anchors were not secured correctly, there were various stowage issues down below and the lee cloths needed to be stronger (as Finbar can testify!), but generally all was ship-shape.
As the wind slowly decreased we put up more sail again, but the wind was now SE and pushing us further out to sea. Getting the forecast on long wave radio seemed to work only during the night and early morning.  This was a frustrating exercise and often the reception was very bad.  On the 6th day out from Falmouth the forecast indicated a low was developing off the sea area Trafalgar.  We were in a flat calm 100 nautical miles off Cape Finisterre and I made the decision to make for Bayona on the west Spanish coast.  We did not like starting up the ‘iron topsail’ but I felt that it was a prudent decision.  We motored in a flat calm for 24 hours during which time we saw the classic signs of an impending weather system in the clouds.  As we closed the coast we motored into thick fog! Not my preferred way to end our maiden voyage.
We found ourselves surrounded by fishing boats heading south while we were heading east. With no radar and all hands on deck, looking and listening, it was a tense few hours (though Lochlann enjoyed testing our foghorn). During this time I realised that my iphone had reception.  I turned on the internet and opened up the AIS app, and we could see all the fishing boats and the direction they were going. Brilliant! This helped us enormously, and we passed many fishing boats without seeing their lights but smelling them close by!
Then, all of a sudden we motored out the fog and the coast was visible ahead, with the full moon shining down on us. What an amazing moment. We had crossed the Bay. It was also a great relief, as I did not relish closing this rocky coast and anchoring in fog, even with an ipad chart plotter!  Almost immediately the Guardia Civil motored up to us, hit us with an enormous searchlight and wanted to know where we had come from and where we were going. Fortunately I speak Spanish, and they seemed a bit amazed when I said we had sailed directly from Falmouth in the UK, but they sent us on our way with a friendly wave towards Bayona.
The smell of land after 8 days at sea was very strong. We anchored off Panjon (opposite Bayona) in 2 ½ fathoms of water at 1am in the morning after logging 754 nautical miles – by no means a speedy passage, but for us it was the beginning of a life-changing voyage which we hope will take us across the Atlantic, and who knows, even beyond.
We opened a bottle of wine and ate a feast of bread and cheese.