Well I thought it was going to be a fantastic sailing year but Coronavirus is having a huge impact! 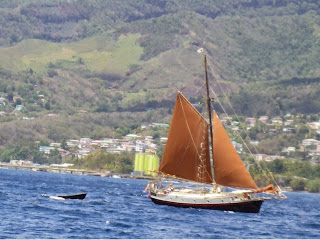 Stay safe everyone and see you on the other side!

In September I decided to sit the RYA Yachtmaster Offshore Practical exam. Having sailed for more than 35,000NM many people have asked me why? Well, after 30 years of running, performing and touring with Bash Street Theatre I have decided to take a break and become a professional sailor. I would like to develop a mixture of teaching, yacht delivery and charter work. I would love to be a skipper on classic charter boats, and also teach on gaff rig boats (in between sailing on Island Swift) and to do this I needed to pass the Yachtmaster.


I decided to take the course with Cornwall Cruising because they are based in Falmouth, not far away from my home in Penzance. After sailing gaff rigged boats for most of my life, it was going to be a different sailing experience on a Beneteau 35. I chose to do this on a modern boat because I wanted to have that extra experience. I spent a week brushing up on my navigation, secondary ports and such, and then joined the boat on a Sunday evening.

I am currently updating older blogs written but not uploaded.

But all is good now and we will be sailing again next summer!

It was so very strange. After we arrived back in Penzance in July 2016, we did not use the boat again for nearly two years.

The boys immediately enjoyed unrestricted water, electricity and internet, and discovered the joys of parties. Suddenly we found that we had teenagers in the house! So much had changed from when we left two years before. Sadly they did not want to go sailing with us, and we were not happy leaving them while we went sailing, so poor Island Swift was a bit abandoned. 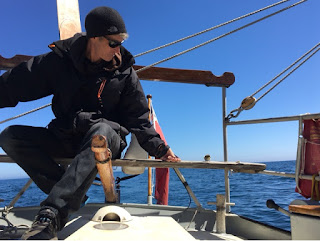 Within a week of landing, Finbar and Lochlann, with help and encouragement from cousin Kesha, were suggesting we revive an old show, CLIFFHANGER, but this time with them performing in it. We cautiously agreed and after just one day's rehearsal we could see that they were all rather good.
So we made a few calls and arranged for some performances for us all. All very last minute, but in the end we pulled together a mini tour of about 10 performances. We got our 7m Mercedes van back on the road, and after two years away sailing Bash Street Theatre was back in business, but this time with a family show. It was great fun performing alongside our boys and cousin Kesha.

Older Posts Home
Subscribe to: Posts (Atom)
Island Swift Travels
Some of our sailing adventures on Gaff cutter Island Swift, which is a 35ft fixed keel Wylo designed by Nick Skeats. JoJo is the skipper and sails with her husband Simon.