It is so hard to choose the right moment to leave on an ocean passage. This last stage, of 1,200 nautical miles, was potentially the most problematic. It was highly likely that a frontal system would cross our path, bringing adverse weather conditions at some point. We had already prepared to leave about three times, only to cancel at the last moment because I was not happy with the forecast. This is very hard for us all as we psyched ourselves up for departure. Finbar and Lochlann were missing their friends back home, and were particularly keen to leave, but it has to 'feel right' before the final decision is made. Finally, after a frustrating few weeks, a decent weather window made the decision possible, though we would have to motor across the Azores high to get to the SW winds that would blow us home. It was unusual for us to motor at sea, but motoring was better than waiting, and we had been waiting long enough.
So in high spirits we said goodbye to Horta and headed North with all sails set. I was still not completely well so I had to conserve my energy, and this turned out to be the most relaxed passage since we had left Falmouth in September 2014. Simon had become so competent, and with Finbar's help they were fully capable. I was relegated to the role of adviser, and for the first time ever, I spent time reading a book on passage! 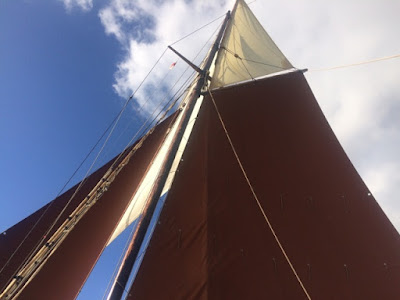 In many ways this was an uneventful passage. When the wind ran out we motored North for 36 hours, then set sail again towards Penzance and home with a Westerly wind slowly increasing. The wind became steady, we had very little sun and it became distinctly colder. Out came all the jumpers, sea boots and oilskins as we made good progress home. One night, still 100s of miles from land, Simon saw a light and the AIS beeped to warn us of a vessel close-by, then came another and another and another. In the end we sailed through a pack of about 30 Portuguese fishing boats! We were supposed to keep clear of them, but they kept changing course, making it very difficult indeed to avoid them. Simon did a brilliant job weaving his way through these trawlers as dawn broke over a grey ocean, and we shared a cup of tea together.
A few days later as we crossed over the continental ridge we were surounded by dolphins who were too busy fishing to pay much attention to us. We started to see more ships and fishing boats as we closed land. We were visited by three very tired pigeons, who stayed with us for about 24 hours. We gave them some water to drink and some oats to eat and then they left us. I wonder where they were going? 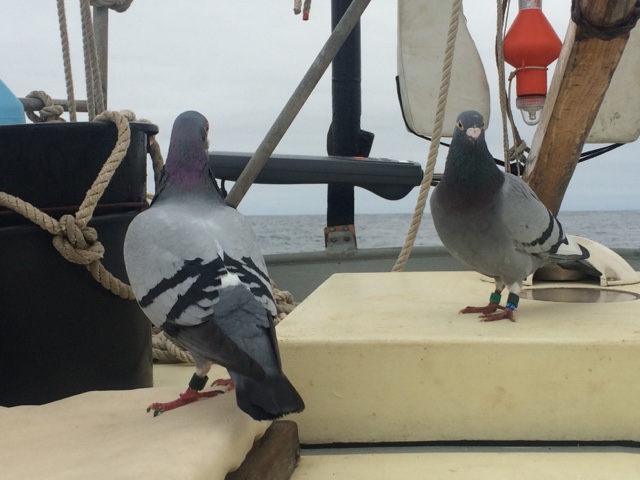 Excitement was growing as we got closer and closer to home. Then on the 7th July at about 6am we sighted Bishops Rock lighthouse and land - the Isles of Scilly. The wind reduced and we were forced to start up the iron topsail again, to make sure we arrived in time to enter the lock gates in Penzance. It was fantastic to see the Cornish coastline again, motor sailing past the Minack Theatre at Porthcurnow, past Lamorna Cove, and finally into Mounts Bay - where it started to rain! We lowered the sails, motored into Penzance harbour and moored up. Within a very short space of time, we had gathered some essentials (including a bottle of bubbly), shut the hatch and were walking up the hill to our house - in the dark, in the pouring rain and still in our oilskins! 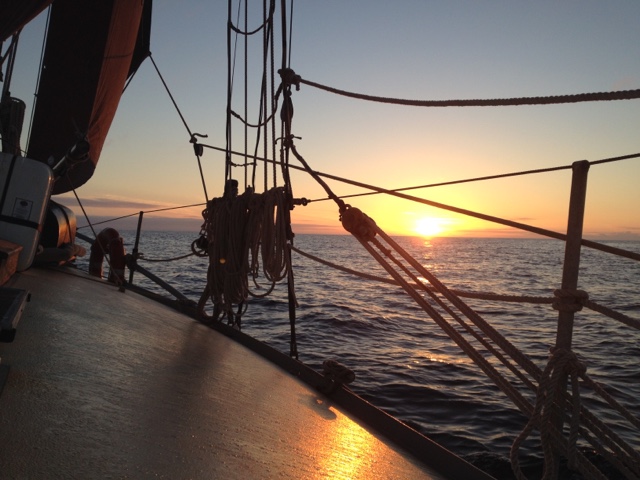 It was very strange to be back in Penzance. We had travelled over 9,000 nautical miles since we had left in August 2014, and the boys did not want to go sailing again "for a very long time".  This meant we were not able to leave for Brittany and the maritime festivals in Brest and Douarnanez. We had arrived so much later than expected, and it would have meant leaving again within a few days. This was the second time I had been thwarted in a plan to take part in the Brittany celebrations - 30 years ago I had been on my way from the East Coast but only got as far as Falmouth. I am determined one day to make it 'third time lucky!'
The day after we arrived home, the 'Sea, Salt and Sail' classic boat regatta began in Mousehole, just around the corner from Penzance. We had planned to attend but then found that our staysail boom had become delaminated (just like our boom had in Grenada last year) so Island Swift was left in the wet dock and we set off to Mousehole on our bicycles. We felt a bit deflated to have left our beautiful Wylo just a couple of miles away, but I did manage to join in with the regatta sculling race.
A big thank you to my wonderful boys Finbar and Lochlann, and my fantastic husband Simon for making it all possible - for making a dream come true.
When shall we leave to sail round the World...?

Newer Post Older Post Home
Subscribe to: Post Comments (Atom)
Island Swift Travels
Some of our sailing adventures on Gaff cutter Island Swift, which is a 35ft fixed keel Wylo designed by Nick Skeats. JoJo is the skipper and sails with her husband Simon.