For many years we have heard about Antigua’s Classic Yacht Regatta. Everyone said we should try to be there and join in, so we did. We did not expect to win anything, but we were looking forward to having loads of fun and seeing some wonderful traditional boats under full sail.  We spent the few weeks before the regatta sprucing the boat up ready to cross the Atlantic shortly after the Classics, but also secretly we all wanted Island Swift to look her best!

We arrived at our designated berth on the Wednesday morning. This was one of our rare visits to a marina, but the boys were slightly disappointed because they had hoped we would have Internet on the boat! We signed up for all the events (including a cocktail competition!) and we received lots of free ‘goodies’: t-shirts, hats, a box of beer and a bottle of rum!  Where were we going to find room on the boat for all this stuff?

On Thursday morning we did a last tidy-up before we were visited by the committee members who were judging the Concourse d’Elegance. The whole marina by this time was full of beautiful boats of all sizes, miles of perfect varnish, enormous flags and some very rich people. We were one of the smaller boats and as ‘live-aboards’ we couldn’t hope to match the perfection of some of the wealthier boats.  The judges came aboard and Lochlann did his best to charm them. That evening it was prize giving for the single-handed race and the Concourse d’Elegance.  We were there to cheer on our friend Leo Sampson for winning the single-handed race, so we were completely surprised when they announced that Island Swift had won an award for the ‘most seaworthy boat’ as well as second in our class for the Concourse. What a start!

The following day was our first day of racing, and we were determined to have as much fun as possible.  We all dressed up in piratical costumes and were joined by two wonderful friends ‘Captain’ Jack and his beautiful wife, Fizzy, who added the extra sparkle to our happy band.  We were not very fast as there was hardly any wind, but we looked the part with Island Swift sporting a huge Cornish flag and both topsails, and with Finbar and Lochlann climbing everywhere - up the rigging, up the mast, and on the end of the bowsprit.
After an exciting day’s race (I think we came last!) it was time for me to put on a cocktail dress and present my offering to the Mount Gay Rum cocktail competition. A friend had told me about it as soon as we arrived, so I was one of the lucky six who signed up, which included another bottle of rum and a special glass. I presented the ‘Island Swifter’.


Island Swifter Recipe
Homemade lemonade cordial made with sugar, limes and ginger.
Mount Gay Rum
Topped with fizzy water
Grenadine dropped into the bottom of the glass
Decorated with sugar and grenadine on the rim of the glass, two little red pepper ‘islands’ (thanks Fizzy) namely Antigua and Barbuda, and a straw with an origami bird

We were expected to make our cocktail on the stage, presenting it to the judges and the audience.  Most of the other competitors made their cocktails hidden by the high table that I could only just see over. I presented mine in full view of the audience, juggling limes and trying to make it as fun as possible.  One competitor stormed off the stage cross about something and the other competitors offered various different variations on the rum theme. I was completed shocked to find that I had won first prize which was (yet another) bottle of rum and 250 US dollars!

The next day’s race was as much fun as the first (and this time we weren’t last) and this was followed by a party for the boat owners (no crew allowed!) with a free meal and my Island Swifter cocktail served as guests arrived, complete with origami birds. It was also the Open Mic night and we were scheduled to start the evening off with our Bash Street Family Band. Our lovely friend Tom, who we had met in Grenada, was also at the regatta and he joined us on the stage for our 10-minute set.  It was very special to play music with our wonderful teenage boys and supported by many very special friends in the audience. Thank you Tom for playing with us, the guitar made all the difference. Later that night Finbar and Lochlann did some fire poi accompanied by a drummer on stage. Simon and I then hurried off to the meal so sadly we missed the other open mic offerings.

As we awoke on Sunday morning to our daily delivery of croissants, orange juice, yummy biscuits, yachting mag and daily newspaper, we realized how exhausting this racing lark was.  But we were still determined to have as much fun as possible. Gale joined us on the Sunday race, also dressing up, and we became known as the pirate ship.  After the Sunday race we sailed into English Harbour, which was packed with crowds to watch the boats. Simon and Lochlann were up the mast, while Jack played music on his guitar and Fizzy, Gale and I added extra colour.
Monday was the last day of racing after which we were mooring in English Harbour at the historic Nelson’s Boat Yard.

Prize giving night was very memorable with Linda plying me with bubbly! We were all very surprised to be called up on stage. We had won third place racing in our class and more amazingly a trophy called the Spirit of the Regatta (I think for just having so much fun!)
The next morning we awoke with throbbing heads to very little wind and dinghy racing. Despite the rain we rowed, sculled and sailed. Jack was a hero to sail our dinghy Swiftlet in hardly any wind, Simon, Finbar and Lochlann all rowed manfully, and I had a sculling battle with Jan, and lost. Lochlann joined Leo in the sculling race on his folk boat. Fizzy was a great sport to row doubles with me, and I had a special sail on Bruce’s, beautiful sailing dinghy. We ended the day with a cream tea in the lovely gardens.

What a wonderful time we had.  It was a pleasure to race against all our competitors who were friendly and showed great sportsmanship. I highly recommend everyone to participate in Antigua Classics, it is such a friendly event.  Since then we have found that Island Swift has a picture in Carribbean Compass (June 2016 issue) and there are pictures of both Lochlann and me in Classic Boat (June 2016 Issue). 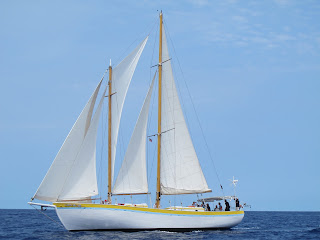 Check back for more photos soon!

Newer Post Older Post Home
Subscribe to: Post Comments (Atom)
Island Swift Travels
Some of our sailing adventures on Gaff cutter Island Swift, which is a 35ft fixed keel Wylo designed by Nick Skeats. JoJo is the skipper and sails with her husband Simon.