Island Swift Back in the Water by JoJo

After spending five months back in the UK, it was very strange to find ourselves back on the boat. Island Swift was absolutely fine sitting out of the water on a hurricane cradle in Grenada Marine. There was no mildew, no bugs and all the bedding was fine in their dry bags. What a relief! Many thanks to Jack for changing the crystals every month, to reduce the humidity in the boat.
We were met at the airport by Jack and John in a pickup truck, this was a good start as Fin and Lochlann were very happy to sit on the back. We dumped our stuff on the boat and made our beds then walked over to John and Gill's boat Petronella for a lovely  supper. What a wonderful welcome back to the Caribbean. Thank you Gill and Fizzy for the lovely feast, and John and Jack for collecting us.

It took us two weeks to get back into the water. I don't really know how it could have taken so long, and it felt like we were stuck there for ever. It was still very hot in November and difficult to work in the midday heat.  Also in the first week it rained several times each day which made painting rather difficult. Then we discovered that our boom had become delaminated in the heat and humidity! Not a good day. Luckily help was at hand. Ben and Philipa on Danu were in Grenada, and Ben was working in Grenada Marine! Hurray! We had met them last year in the Canaries and Cape Verde. Simon split the boom in two and with Ben's help glued it back together. Thank you Ben! We finally made it back into the sea on the 19th November, but it still took us another two weeks to before we were ready to set sail.

But it was not all hard work, every Saturday there was the wonderful Hash Run to participate in. This is a running/walking event that takes place all over the island. It's a great way to see Grenada.  The kids and I would mostly walk while Simon was up ahead with the runners.
On the 2nd December we said goodbye to our friends and had a fast and furious sail round to Secret Harbour. Only about 10 nautical miles but it felt momentous. We did not plan to stay long, but the Christmas winds closed in blowing very hard. I wanted to get us a vhf radio that worked! Lochlann made friends and wanted to stay for the full moon party on Christmas Day. So we stayed and were very happy that we did.
We participated in the Secret Harbour music sessions, Finbar went to a night club, Simon was running loads, we met lots of wonderful people, and Lochlann was just happy  being on the boat with other children around. We met a lovely couple called Tom and Natalia from Pontao, and Lochlann had lots of fun playing with their children, Pola and Owen.
We also welcomed back friends on Abracadrabra, whom we met last year in the Cape Verde, Philip and Ann with Jabez and Annelieze. So good to see them all again.
So we stayed at Hog Island for Christmas. It's not very easy to get into the Christmas spirit when it's 35 degrees and hotter. So we had a very different day - a walk, a swim, a tapa feast with Jack and Fizzy, then off to the full moon party where Fin and Lochlann did fire poi, then back on the boat for silly games and Baileys. Wonderful. Although I know that the boys are looking forward to being in the UK for Christmas next year!
Our big present for us all was a little outboard motor for the dinghy (which Ian and Linda kindly sold to us for a very affordable price). We haven't given up rowing ashore (a practice that is sadly quite rare in the  Caribbean) but now it is a bit easier to get to good scuba and snorkelling sites which are not always easy to anchor nearby.
On the 29th December we sailed north to Dragon Bay where we celebrated the New Year with Tom, Jack and Fizzy and the crew from Abracadabra. We had hoped to get to Carriacou for New Year but the winds were still strong and we were all new back on the boat, so caution was in order. When we did sail on the 5th January we had a brisk sail with one reef in the main, up around the north of Grenada, past Isle de Ronde and into Tyrrel Bay on Carriacou. 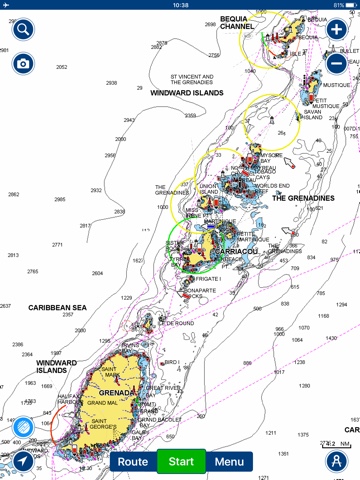 We really enjoyed our time in Tyrrel Bay. Finbar and Lochlann did their Marine Biology scuba course (a Christmas present from us) we earned ourselves some pizzas by playing music at a local restaurant, and it was here also that we met a lovely man called, Hutch, who played chess with Fin, became a great friend, and who organised Sunday morning sailing in the mangroves. Finbar became 17 years old (how can that be?) so we found him a desert island (Sandy Island) and had a special celebration with Abracadabra friends.
Out next destination was Union Island. This was a magical sail. The wind was brisk, the sea was moderate, and we had the topsail up for the first time in the Caribbean. After checking in at Clifton (which was a bit too touristy) we sailed round and anchored off Frigate Island. It was here that our leisure battery failed. Now we needed to get somewhere with a shop to buy a new one, so sadly we did not visit Tobago Cays (next time maybe!).
We pressed on round to Chatham Bay, which was beautiful and peaceful, then sailed to the island of Bequia. It was here that we made the difficult and momentous decision to sail home to the UK this summer (so now we have lots to do to get ready!) We liked Bequia but did not stay long because there are so many more islands to visit. The boys went diving on a wreck of a tug boat, and Simon and I went out to supper! What a treat.
Written by JoJo
Proof read by Lochlann, so if its his fault if I made speling mistakes.
Photo labels by Lochlann. 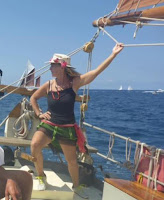