Crossing the Atlantic Crossing by JoJo 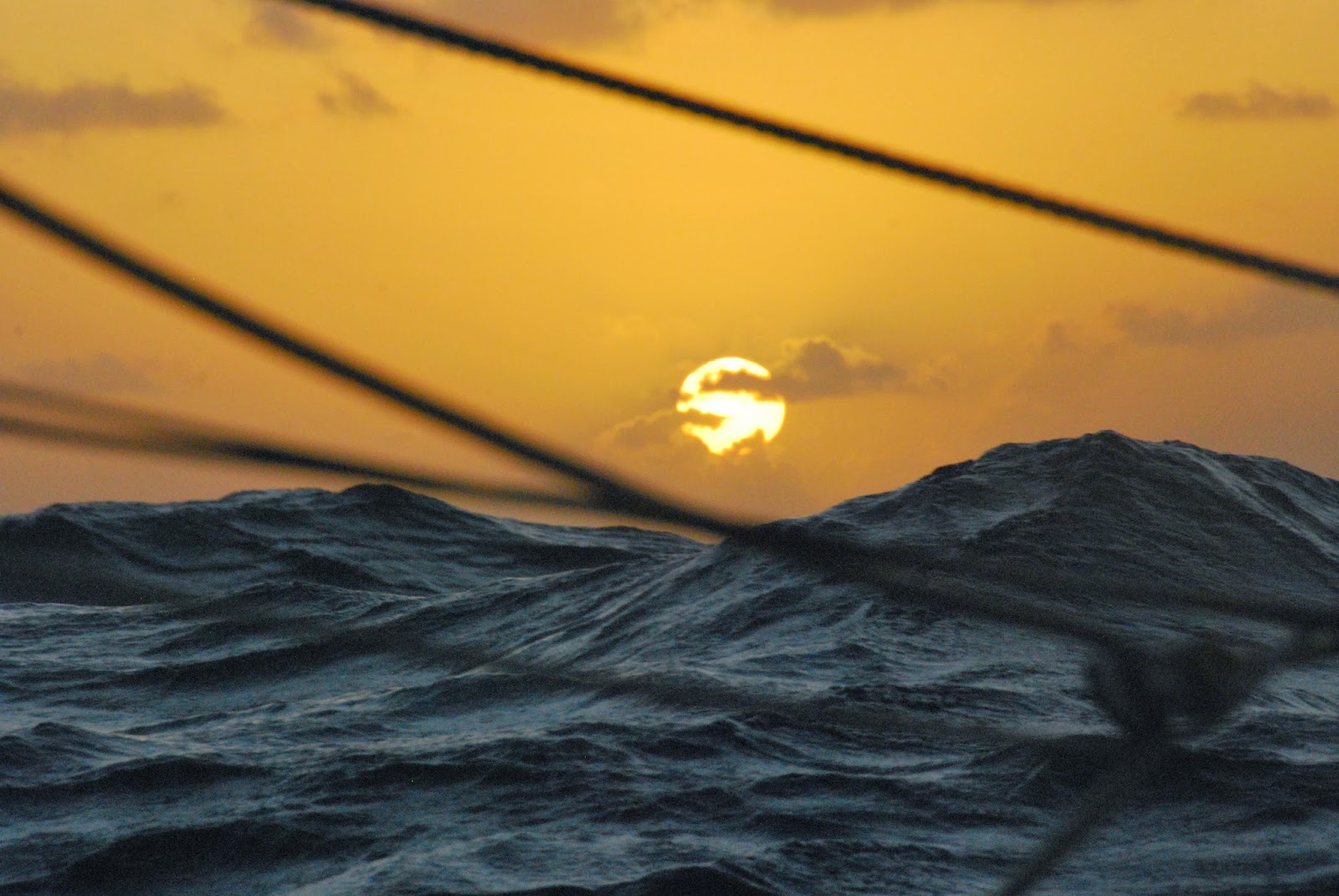 After all the preparation, mental as well as physical, it was finally time to leave Mindelo, on the island of Sao Vincente, and sail across the Atlantic to the Caribbean.  The Mardi Gras carnival was over, the forecast was good.  It was Monday 23rd February, and it was time to go.
We hoisted the dinghy on board, hauled up the anchor and sailed out of Mindelo, waving goodbye to our friends as we left.
We were very quickly out of the lee of Mindelo with two reefs in the main sail, running down the channel between the two islands. Both boys started to feel seasick almost immediately and took some tablets.  This was a bad start as they now also started to feel very sleepy.
During the evening, as we sailed under the lee of Santo Antao (even though we had given it a wide berth), the wind decreased and we shook out the reefs.  A school of dolphins came and said good-bye as we sailed west, and all the anxiety of the pre-departure nerves slipped away.  We were committed. From now on it would be easier to sail on rather than back.
My first early morning watch was rather exciting as I saw the Southern Cross for the first time! We were sailing nicely, all crew asleep below, the Southern Cross to port and Jupiter to starboard. All would have been fine except the wind increased and we needed to reef. I waited for first light, and at 6am Simon and Lochlann came on deck to help reef.  Poor Simon had only gone to bed two hours previously – not a great start to our trans-Atlantic crossing!
We found our first flying fish on deck that morning. Sadly, it was too small to eat.  Throughout the passage we all enjoyed watching the flying fish dart out of the sea and fly away from the boat. I called them ‘ocean fairies’, speeding us on our way.
The second day out we were having difficulties with our self-steering gear.  We realized that it was the first time we had used it while running on the starboard tack.  Simon spent the morning successfully fixing the problem.   Later that day, Tuesday 24th February, we logged 3000 nautical miles since leaving the UK - Falmouth did seem like a long way away!
Every morning Lochlann was awake at 7am to make breakfast for me (thank you Lochlann) and then stand watch, so that I could do some chores down below, and get some extra sleep if all was well.  The first thing Lochlann would ask was, ‘are there any flying fish for breakfast?’ It was not until the fourth morning that the answer was ‘yes!’ From then on there was one fish every morning for a week. We noticed that on the western side of Atlantic the flying fish were smaller, so (sadly for Lochlann) not big enough to eat.
Daily chores were sweeping the floor, turning the eggs, checking the vegetables, oiling the self-steering and Walker’s log, and a general tidy-up below.  Most mornings I also spent some time having a good look at sails and rigging, trying to spot signs of chaffing.
After three days of sailing south-west we altered course to west for Martinique.  In retrospect, we could have gone further south, because we had a good current in our favour and then we seemed to lose it (I think it ran further south, and it was not until two days before we arrived in Martinique that we got the current again).   As we lost the current, we started to see loads of seaweed. This was a problem because it got tangled up in our Walker’s log.  In the end we brought the log in, and thus had to rely on our chart plotter to give us our ‘speed over the ground’, rather than ‘speed through the water’. Sadly, this was an occasion where modern technology won over our ‘old-fashioned’ mechanical equipment.
During the crossing we had loads of treats. I made fudge regularly, which the boys particularly enjoyed as a reward after a quick bit of reefing. I also made scones and fruit buns and, of course, chocolate cake.  When things were steady, we would watch a video together in the early evening, while the boat sailed herself (very surreal watching X-Men in the middle of the Atlantic Ocean!). On other evenings we played card games, usually Bridge, which we had taught ourselves since leaving Falmouth.
We put our clocks back three times during the passage, on Day Four (at 31˚ west), Day 12 (at 48˚ west) and on the day we arrived in Martinique (GMT +4 hours).  We adjusted the clock at mid-day which is traditional on sailing boats. 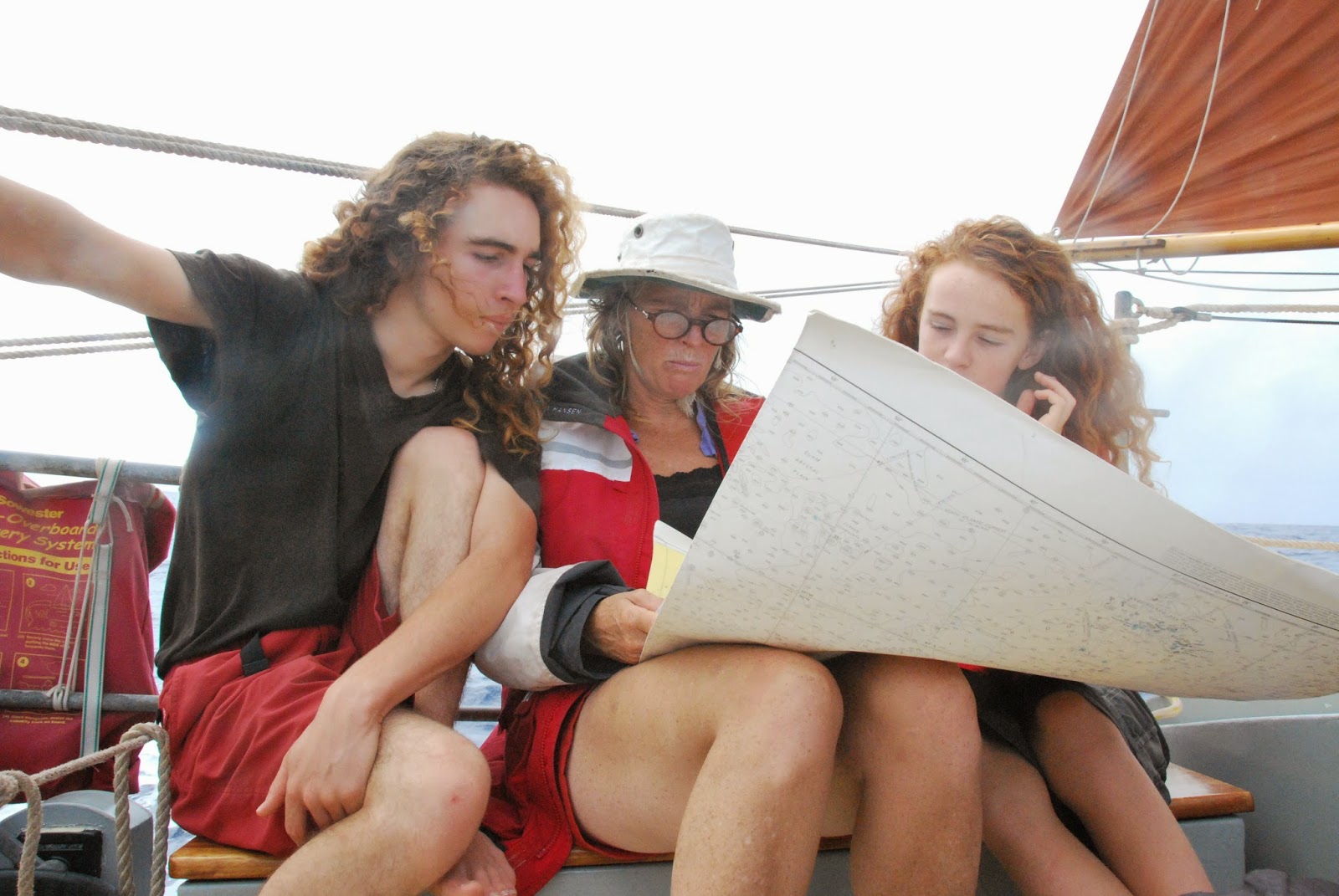